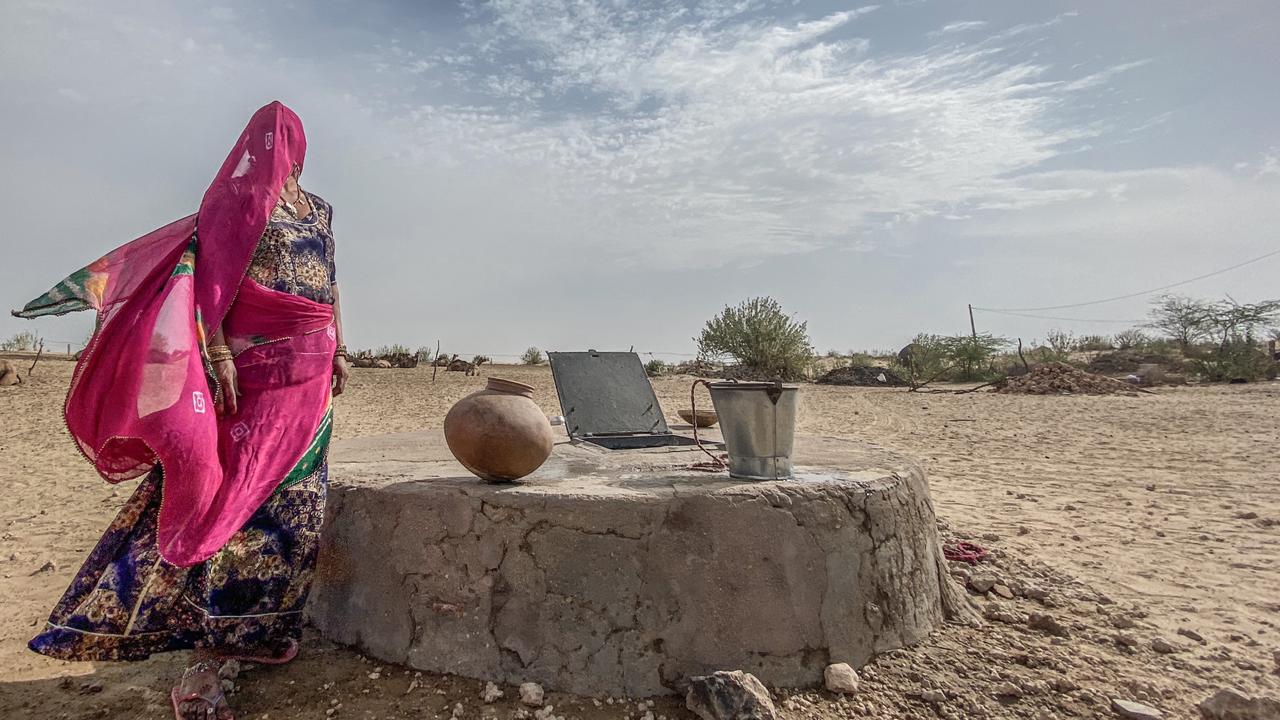 Water has always been the necessity of every human being on this planet but the use of water and its conservation is still not in the priority list. Nowadays, we always try to be sustainable and reduce the use of water but reality is different. We are not sure how much we are saving or supposed to save. Conserving one bucket of water can be an achievement for us but one-bucket water is luxury for the people of Thar Desert.

Western Rajasthan, which encompasses Barmer, Jaisalmer, Jodhpur and Bikaner districts, comes under an arid zone that has a high temperature, low humidity, and low rainfall, erratic and poor textured soils. Agriculture system in this region is mostly rain-fed, mono-crop and subsistence type because of climatic constraints. Water scarcity is a serious problem in the region with good rainfall expected only in an interval of three to four years. Rainfall data of the last 100 years shows the region has dealt with famines in 61 seasons, of which 24 were severe famines, while the rest were medium. A recent report of Central Arid Zone Research Institute (CAZRI) claims the Thar Desert has been witnessing major climatic changes over past decades. According to the report, Thar witnessed about 17 thunderstorms annually in 1966, which has now reduced up to 2.5 per year. The trend of shifting sand dunes has also affected weather patterns.

Jaisalmer district in Rajasthan is evidence of alarming changes in ecological indicators across the Thar Desert. While total rainfall received in the region has registered an increase, its uneven distribution during monsoon season has affected crops putting farmers in distress. Pokhran is one of the poorest and socio-economically challenged blocks of the district, which is entirely a sandy waste, forming a part of the Great Indian Desert. The general aspect of the area is that of an interminable sea of sand-dunes, of all shapes and sizes, some rising to a height of 150 ft. Water is scarce, and generally brackish; the average depth of the wells is about 250 ft. Given lack of water, only rain crops, such as bajra, jowar, til are grown – that too scantily, and with inadequate irrigation systems. The average rainfall of the region is around 178.5 mm as per the state report of 2019. In remote villages, basic drinking water is still a survival challenge with water purchased from distant villages. Pokaran is also famous for the nuclear test in his land and Asia’s largest firing range in the region, the community people of Pokaran are proud of it but the problems comes with the bad water quality in the regions that leads to severe diseases.

If we go back in time, on May 11, 1998, Pokaran was selected for a number of nuclear tests to fulfil the requirement of nuclear testing analysis data for Indian arm force. These tests were conducted near Khetolai and Lathi villages. Since then Khetolai had attracted many tourists and media persons.

Khetolai has volcanic rock formation. These rocks were formed from the volcanic eruption 1000 of years ago due to molten lava and non-porous. Therefore, it neither absorbs water nor retains it. According to the senior groundwater scientist Dr. Narayan Das Inkhai, the area with the presence of volcanic rock, is selected for nuclear testing because after the explosion in the rock plate, the radiation does not pollute the groundwater. In Pokaran, the groundwater is found at nearly 2000mt deep from the surface level. There are around five to six village like Thaat, Ujlan, Naniyai, Falshood, Bhaniyana and Dantal containing volcanic rock and minimal groundwater. That was the reason these places were selected for numbers of nuclear tests starting from May 18 1974 near Khetolai.

Khetolai is also famous for Asia biggest firing range, which is 2.5KM away towards the border and former president of India Dr. APJ abdul kalam inaugurated the place. This firing range resulted in accumulation of used bullets, damaged mines, used grenades and failure of missiles part may lead to accumulation of hazardous waste. The vacuums and filters used in Guns and rifles contain lead in it, which is harmful for the soil.

Over the years, due to climate change in the region, the place experienced windstorms, extreme hot summer and irregular rainfall that caused the demolition of volcanic rock present in the land. Due to which the radiation from the nuclear test is not absorbed by the damaged rocks and due to irregular rainfall the, the radiation and waste released is soaked down to the ground water. The accumulated hazardous waste from the firing range mixed with the soil and eventually goes down to pollute the ground water quality through rainwater.

The traditional water extraction process by the people of Rajasthan is from the ground and storing them in their customized personal water storage tanks called Tanka. The alternative way of water storage is in various community water bodies called Kund/pond. In various developed regions, the water community ponds are being revived and distilled periodically for storing rainwater for future use. The extreme hot summer of the region evaporates water from the water bodies leading the people of Pokaran to dig water from the ground.

With the course of time, people started observing various kinds of disease due to the use of ground water in that region. Diseases such as skin infection, Anemia, indigestion, stomach, worm infection and seasonal infection are observed due to poor water quality and air pollution in that region.

Now at this point of time, people are concerned about their health and prefer not using the groundwater anymore, they have shifted their interest to the community water bodies like Ponds/Nadi. The water in these community water bodies are relatively clean at that region because of the indigenous plants like moringa oleifera drumstick, Azolla, Lemna, Salvina and waterweed are present inside the water bodies and at the edge to make the water distilled. The people also use traditional water purification techniques in their house to get good water quality. Most of them boil the water before they intake it, few use filtration through clothes and wood ash of sal trees are mixed with water for purification.

Water testing & monitoring is one of the most important components in environmental management of aquatic ecosystems. Water testing is the physio – chemical parameters like pH, electrical conductance, Chloride, Fluoride, Nitrate, Sulphate, Boron, Total hardness, Dissolved Oxygen and Biochemical Oxygen demand are main constituents defining the quality of water. Presence of these parameters in water beyond the permissible limit is considered polluted water quality. CPCB has identified water quality requirements in terms of a few chemical characteristics, known as primary water quality criteria. (Annexure 1)

To get a clear picture of the water quality of ground water and surface water of the Pokaran water testing was conducted by URMUL trust, a renowned NGO of Rajasthan working holistic development for the rural villages of western Rajasthan. These testing are conducted by taking 12 samples of ground water through hand pump extraction and 5 samples of community water bodies in the region. (Annexure 2 & 3)

The result of comparison between groundwater and surface water in the Pokaran region was very strange. Generally if we talk about the quality of water than groundwater is better than surface water but in this comparison the ground water was contaminated. According to the water, testing results out of 12 sample 4 hand pumps samples were recorded with the presence of e-coli that means the presence of bacteria in the water but there were no sign of bacteria in these five samples of community water bodies. The amount of iron in ground water was also exceeding the threshold, which causes hemochromatosis that leads to damage of liver and pancreas. It was noted the amount of arsenic was also high in the surface water and excess of arsenic can cause cancer in skin, bladder and lungs.

This was also evidenced with the evidence from the results of 40 health camps conducted by URMUL trust from 2019-2021 in the 14 villages of Pokaran region.(Annexure 4) These health camps data speak about the number of patients treated or given medical facilities for various kinds of diseases. The major disease was skin infection, indigestion and seasonal infection. After enquiring to the patients suffering from these diseases, it was verified that they were using the water from hand pumps.

Now people of Pokaran region have identified their preferred water sources and they have taken major steps to improve their health. There are six major community water bodies in the region which are being used by the households of 20 nearby villages and livestock of these villages are also dependent on these water bodies. The traditional water purification techniques are also helping the community members to have clean water. The local government has also taken some initiative to install RO plants in the centre of the village and in the schools for the students. The women of the villages also started developing a kitchen garden at their house to get nutritious food for their families’ health. The communities in the region have adopted this lifestyle of being proud of their area for the tourist attraction and nuclear testing as well as looking after their health.

The overall camel population in India is rapidly declining (37% reduction between Livestock Census 2012 and 2019). The Thar desert…

The Pastoralists Of Rajasthan And Thier Lives

Pastoralism is a form of animal husbandry which involves letting out animals (livestock) to pastures for grazing. This usually is…