Struggles And Challenges Of The Pastoral Ecosystem In The Thar Desert 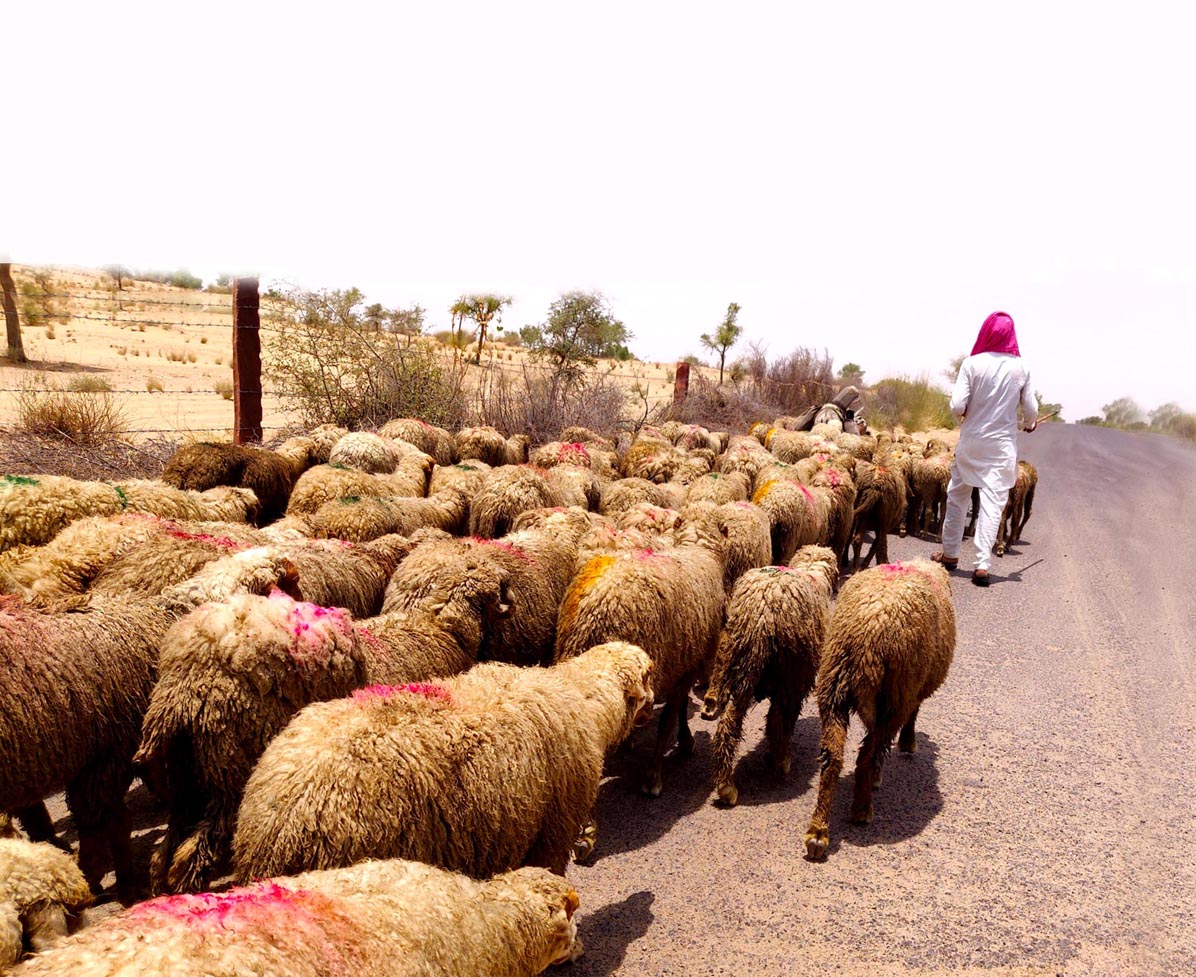 Pastoralism is an occupation that is both beneficial and necessary for the entire Indian economy and wildlife ecosystems to thrive. However, in recent years, pastoralism has not been getting the importance which it needs to be given. It has been on a decline in recent years due to various challenges faced by these pastoralists. Pastoralists are one of the most hard-working in the economy, leaving their residence with their livestock early in the morning to reach pasture lands far away through different routes in all kinds of weather, some very difficult to navigate through, finally returning at the end of the day. Yet, after working this hard, they are heavily ignored by everyone.

The most obvious and common issue faced by pastoralists in the dry and arid regions of Rajasthan is the lack of water availability. Along with this, there is also massive unavailability of fodder. These issues have already put these pastoralists in a tight spot. They have to keep changing their routes of migration according to the availability of water and fodder. Droughts severely affect their lives and Rajasthan being a drought-prone region doesn’t play into their favour.

They also need to take care and look after their herd’s health. Diseases such as Pox, Measles, etc, found along their migratory paths are a great threat to the lives of their livestock.In such a situation, the absence of adequate veterinary facilities is a concern. The medical facilities available are too costly for these pastoralists and they cannot afford it. As a result, many of their animals die due to lack of care and attention. Illiteracy and lack of awareness about important topics also hampers them. There is also an absence of useful police machinery. Pastoralists find it difficult to follow up on reports of theft due to police confusion over jurisdiction and follow-up of these reports. Insensitive police and legal institutions barely provide any kind of support to them. Lack of awareness also makes it tough for these pastoralists to approach other state institutions.

The declining relationships between agriculturalists and pastoralists is another challenge that costs these pastoralists a lot. Earlier, pastoralists and farmers shared a good relationship. Farmers allowed the pastoralists to let their animals graze on their land and provided them with water in return for the animal’s fertile manure and other products such as milk. The pastoralists would cross the same piece of land in their routes frequently and would interact with the farmers. In this way, a mutually helpful bond was made between the pastoralists and the farmers. However, this bond between the two has been declining over the years. Farmers have been reluctant to let the pastoralists and his herd onto their lands over fears of the livestock destroying their crops. They have switched to synthetically produced chemical fertilizers and hence do not require manure from the animals. Even though the fertilizers are harmful to their fields in the long run, they use them as they give them better produce in the short run. The pastoralists are not allowed to even cross the farmers’ fields with their animals. Due to this, they have lost access to many grazing fields they have used for long. With the land under agriculture increasing due to the heavy dependence of the majority of the Indian population on it, more and more grazing lands and travel routes are being cut off for the pastoralists. As a result of all this, pastoralists have lost their helping hands and friends in farmers.

Government policies and lack of government representation is a major challenge in the lives of these pastoralists. Policies legislated by different governments may show that effort is being taken to help the pitiful condition of pastoralists in the country, but this is not the case. The pastoralists are not consulted on policies that directly affect them. Many of these policies are just made without considering their actual effects on the pastoral communities. Some policies do not improve their lives and some end up harming them. The ban on the sale and export of both male and female camels is one such example. The sale and export of male camels was an income source for camel pastoralists. However, in 2015, the government of Rajasthan passed The Rajasthan Camel Bill which prohibited the sale and export of camels out of Rajasthan as it mainly used to be for slaughter and the population of camels was declining. This completely disregarded the interests of camel herders as it blocked off a huge source of income for them. They were now forced to graze their animals within Rajasthan. This was also a huge issue as the government had banned the entry and grazing of pastoral animals in national parks. They had now lost a lot of grazing grounds and at the same time, their migration routes were cut off, forcing these pastoral communities into a tough spot. Speaking to a pastoral coordinator for URMUL, Moolaram Ji, he told me that that government policies hardly do them any good. They rely more on NGOs such as URMUL to fight for their rights. The pastoralists are socially excluded at times and the gram panchayats do not attend to their issues. This exclusion of pastoralists from governing bodies must be resolved.

There is a lack of a value chain for sheep, goat and camel based products. The pastoralists have no avenue to sell their products through. Mostly, they have to end up relying on very exploitative middlemen to put their products on the market. These middlemen quote very low prices and ensure that they maximize their own profit margins. There has never been a greater need for a more precise, streamlined and legal value chain system to ensure that vulnerable parties, such as the pastoralists in this case, are not exploited. There is also a need to recognize the uses and advantages of newly discovered products as these may generate new sources of income for the pastoralists. This is currently not happening. For example, camel milk has been said to be a new ‘super food’, providing more nutrients and other advantages than normal cow milk. However, due to lack of recognition of this by the government and market mechanisms, the pastoralists have not been able to make this a new income source for themselves.

Presently, the pastoral fragile ecosystem is facing challenges from rapid urbanisation and disregard of their needs by the locals. Scarce resources and limited exposure make it difficult for them to demand their rights. Their animals urgently require better veterinary support, restoration of common property resources, revival of community water resources, forage support from farmers with fallow lands, and better market access to sell their products. With everything skewed against them, they still manage to go about their lives with a smile on their faces. There is an urgent need to recognise the challenges and struggles faced by this community. With time, these issues are just becoming greater and greater for them to handle. Solutions need to be found immediately to help them survive and maintain their livelihoods. If we’re not careful, the country would end up losing one of its invaluable assets in pastoralists.

Hello Readers, INTO THE HERD is a timeframe photo story of an entire day for the ship of the deserts…