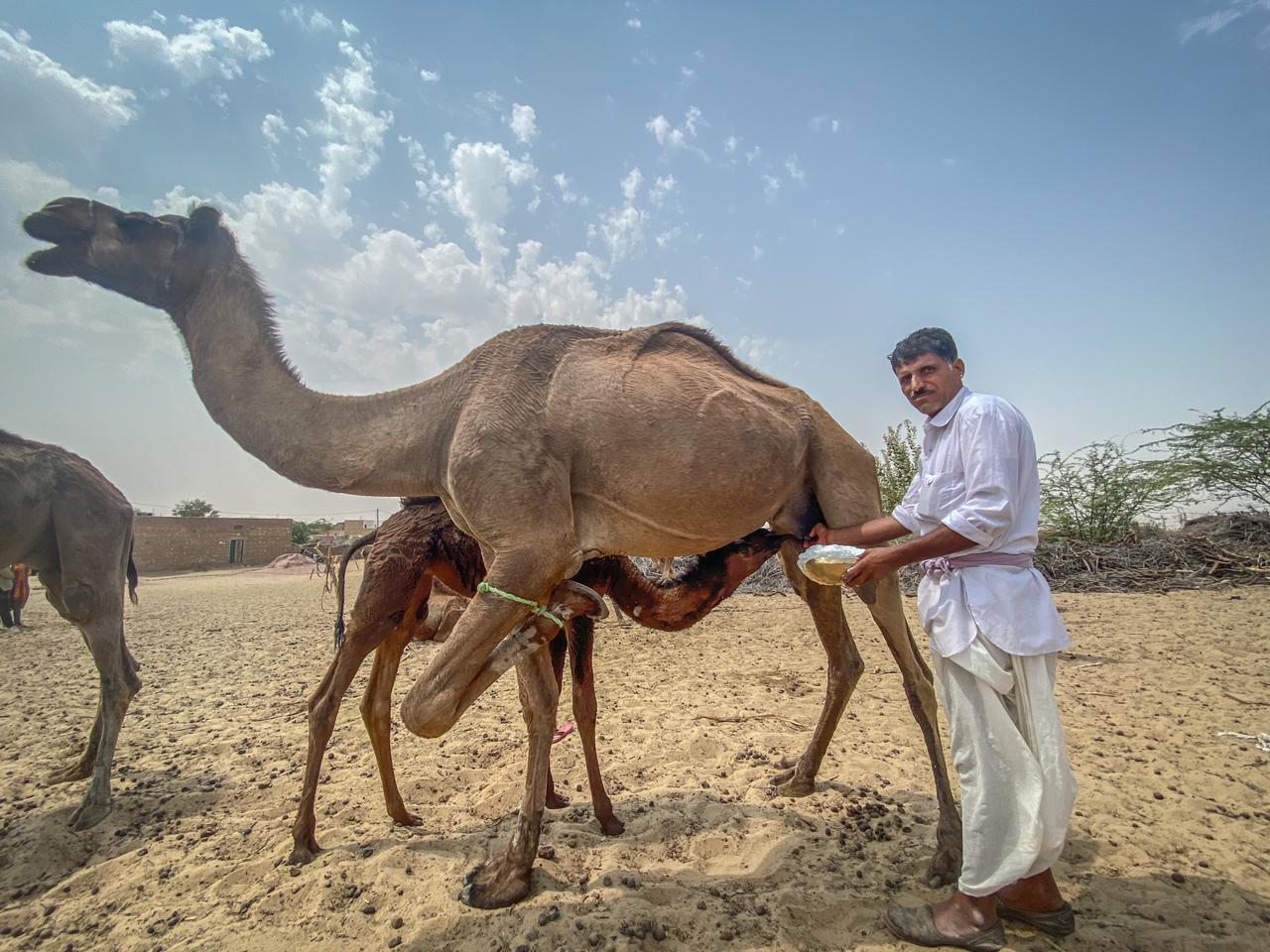 The overall camel population in India is rapidly declining (37% reduction between Livestock Census 2012 and 2019). The Thar desert in Rajasthan, housing majority of the camel herds, has turned into a hotspot of decaying camel-based livelihoods. With high input costs of availing feed, health services, etc. and low returns on investments, the overall monetary benefits accrued from rearing camels have decreased tremendously. Without a solid economic backing or a promising future, camel herders are losing interest in continuing this financially burdensome livelihood. Even cultural values of camel rearing are proving insufficient in keeping this tradition alive. While this may seem like just another animal case gone wrong, it has far-reaching implications that are now being gradually felt across the country.

To relieve the increasing economic costs of rearing, camel herders are being compelled to reduce their herd sizes by releasing domesticated camels to live as strays. Rise in such trends could lead to population outburst of feral camels and create a regional catastrophe. Feral camels, especially male camels in musth, cause damage to properties, human lives and vehicle injuries. Without the support of camel herders and the control mechanisms deployed by them, the direct costs of managing nuisance created by feral camels could be as high as INR 18.6 crore per year, as is already seen in Australia. Closer home, in Churu District of Rajasthan, a four year old abandoned camel was hacked to death by farmers when it strayed into an agricultural farm for forage in July 2020. Incidents like this highlight growing confusion towards managing stray camels and the need to find a more sustainable solution to curtailing feralisation of camels.

Camel herders do not invest as much time into herding anymore. While free-grazing of camels is very much a part of the semi-intensive rearing system practised in India, it is also (mis)used by herders to relinquish responsibilities of the animal. Camels are often abandoned with the pre-text of ‘free-grazing’. Camels left astray wander into fields and cause damage to crops. Farmers take management of such strays into their hands by driving the camels away from their farms towards railway tracks and highways where there is more greenery for forage.

Railway tracks running through camel habitats are elevated at 12-20 ft above the ground level with no easy room for escape from speeding tracks. Wandering camels are not able to climb the steep track slopes on time and often get hit. Camels, both with and without owners, end up victims of reckless driving, unlit roads, lack of customized warning signs and dedicated animal crossings/corridors along highways and railways tracks. In Saudi Arabia, there is growing angst against owners of stray camels on roads and highways and legal experts are campaigning to penalize owners of camels that cause accidents.

Camel herders associated with The Camel Partnership have detailed out the fiasco of camels and railway tracks. Camel herders Kaluram Raika and Kesuam Raika from Srirampura, district Ajmer, have lost 10 camels to the tracks. 12 camels died due to train-hit in Baap, district Jodhpur, in May, 2021, but the owner of the camels was nowhere to be found. Chenraram Raika from Udat has written to railway authorities requesting for increased inspection and investigation to no avail. Railway authorities have no provision for providing compensation to camel-herders for train-hit camels. He has received no adequate response from railway officials despite news coverage of these incidents. Herders claim that the railway representatives blame the camel herders and tells exercise better control over their camels and not let them get into the tracks. But who is to blame here? Most incidents are shrouded in misleading details with fogginess over the real culprit. Frequency of incidents involving vehicles and camels are on the rise in Rajasthan but the government data tells otherwise. For instance, data collected for Bikaner alone, only eight cases have registered FIRs in the past three years (2019-2021); where seven out of the eight camels succumbed to their injuries. Under-reported with no concrete mechanism for either grievance addressal or mitigation, camels and vehicles is a bad combo quickly yet silently blowing out of proportions.

Loss of camel livelihoods leads to increased unemployment in the region. Absence of a lucrative income discourages youth from pursuing camel rearing as a core livelihood option and pushes them to opt for less dignified jobs such as working as migrant labourers in other states, entrenching herder communities further into poverty.

Disengagement of youth from taking up camel rearing also curtails inter-generational transfer of heritage and valuable traditional knowledge. With nobody to carry the baton forward, traditional knowledge of natural breeding mechanisms, feeding practices and disease management are either endangered or eventually lost altogether, casting a domino effect on the entire ecosystem. Now, one might argue that concrete documentation of these knowledge flows might help but camel rearing is mastered through lived experiences. A lot of managing this megafaunal creature – which involves smart tactics and frugal use of available resources – is learnt through practice alone. Rapid loss of camel know-how could gravely impact the conservation and management of this species in India.

Lack of income viability forces camel herders to sell their camels off – birthing illegal trade and transport of camels across national boundaries. A herd of camels being illegally transported from Haryana to Bangladesh was intercepted by Jharkhand Police Department but lack camel experts posed a problem for the camels to be held in Jharkhand. Lack of dedicated shelters or trained people to handle camels gives rise to management burden on the state with increased costs of rescue and rehabilitation. The value of camel husbandry and its unique knowledge system has been recently exemplified in the case where camel herders striving to keep up with the increased cost of rearing threatened to leave their camels outside the offices of district collectors in November, 2020. These are issues that need to be identified and prepared for. As the adage goes – prevention is better than cure. Policy and budget prioritisation where an equivalent amount of money is invested into boosting camel-based livelihoods would be a better option than sweeping the mess that is being created.

Lack of water has always been a problem for any place or region, whether it be the problem of declining…